“The End(s) of the Museum,” an exhibition and related conference held at Fundacio Tapies in Barcelona last spring, posed questions about whether the museum as we know it in the West could be coming to an end. (1) Alluding to “the end of history,” and taking their cue from Derrida’s Les Fins de l’homme, co-curators Thomas Keenan and John G. Handhardt chose to accentuate the two meanings of “ends” – finality, limit; purpose, goal – to indicate that “even though something major is at stake in today’s museum, possibilities remain.” Although the organizers’ intentions centered on other interests, implicit in the theme was the idea of a definable beginning, as well as the potential for tracing the museum’s journey from what it was to what it is, or could be.

It is this transformative journey – the museum’s ongoing transit(ion) – which begs (and largely eludes) analysis today, and which occasionally emerged from the grim finality enshrouding “The End(s) of the Museum.” Clearly, no single beginning can be identified. (In fact, Keenan’s most positive affirmation of the “many possible futures for the museum” was to suggest deconstructing the reasoning behind the museum’s origin – in his opinion, that of loss and impending destruction.) It seems to me that the time has come to shift away from deterministic criticisms of the apparent evils of the museum’s rigidity, and to study instead the process and nature of change effecting the institution from within and without. In order to evaluate the museum’s current condition, its own ever-shifting domain and its widely-varying evolution from place to place must be taken into account.

This was strikingly apparent in Barcelona, where “The End(s) of the Museum” was met with ambivalence. In Spain, it is difficult, if not impossible, to uphold the argument that the museum is in “crisis”; that is, that an abrupt, decisive change is imminent and necessary. On the one hand, the contemporary art museum is a recent phenomenon; on the other, crucial cultural differences, such as a less conflictive relationship with time must be considered, as well as an history of poverty and despotic regimes which effectively cut Spain off from the supposedly urgent issues addressed by “The End(s) of the Museum.” Only within the last fifteen to twenty years have most Spaniards owned a car. Only since the 1980s have a tiny elite traveled abroad with any frequency. As little as six years ago, there were just two television channels (TV 1 and TV 2, both run by the state). Computerized art libraries remain few and far between (less than six nationwide). In short, technological advancements and increased mobility have yet to present a formidable challenge to museums in Spain. When they do, no doubt they will be dealt with in a different way than in “the West” Spain ostensively forms part of.

For instance, it is hard to imagine a strong following in Spain of Friedrich Kittler, technology theoretician and communications specialist (Hum boldt-Universitat, Berlin), who in his lecture relished the idea of reducing the museum to a database. How could the museum at its digital limits appeal to romantics, mystics, poetry-lovers, and those who revel in the sensuality of the object? Kittler’s idea of history as a technology, which provoked the question by one member of the audience of whether every medium can be reduced to a set of information (is there a medium that can be all other mediums?), encountered resistance where the nineteenthcentury museum model remains largely uncontested, even beloved.

But my point here is not so much to dwell on Spanish particularities nor to single out Spain as unusual. Rather, my point is to stress that its situation with regard to museums (and contemporary art) is arguably shared by most of the countries on the globe. Under the circumstances, it is not surprising that Spanish critical reaction to “The End(s) of the Museum” exhibition was lukewarm, and that a primarily non-Spanish crowd attended the conference. Watching most of the Spaniards struggling (silently, out of respect or intimidation, or perhaps lost in thought) to find a common ground between their own nascent, politically-troubled museums and the crippling existential breakdown these long-awaited institutions were apparently destined to suffer, I could not help but wonder if the major flaw of this well-intentioned presentation was not terribly symptomatic of the catastrophe under discussion. That is, when the West’s omnipotence – its will to obliterate difference, its insistence on an only, inevitable future, its all-consuming drive to convert, not engage “the other” – becomes painfully evident even in museum events such as this, it is pretty alienating stuff. 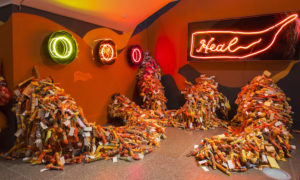