It is perhaps through the delicate insertion of the scopophilic vantage point that we can begin to understand Lynn Hershman’s exhibition, “Virtually Yours.” This exhibition, combined video works and the Phantom Limb series of photographs with a recent interactive installation, Room of One’s Own, presenting the artist’s recent development in virtual reality, the Internet, CD-ROM environments and other multimedia tools. Hershman is a precursor of the technological emancipation of the artist. Her early works involved, specifically, the non-subject, either fictionalized, subverted or blurred with the artist’s own personae, and later cast in her videos, installations and performances. It seems only natural that she would seek to further develop her hybridself by utilizing technologies which permit the encapsulation of the artist’s position in mediatized environments. However, it remains difficult to position her within, or without, postmodern feminist discourses girding the (re)presentation of women in media.

Hershman’s work is seminally concerned with the apprehension of the self and this is especially so when it is reflexively distorted, reinvented, fractured and replicated in the polymorphous possibilities created by the media age. This de/reconstruction of identity, self and body is both in itself a parody and search for what it is to be a subject in a society that is perennially shifting modalities of subjectivity. Margaret Morse, in the catalogue essay, appropriately states that:

Ironically, at the same time that women have laboured for creative self-determination, the very notion of an autonomous “self” has been replaced with a relative and contingent cultural construction that is at best a legal fiction.

This fictionalized avatar of subjectivity is apprehended in Hersh-man’s Room of One’s Own, echoing Virginia Woolf’s 1929 novel. But while Woolf advocated the economic and physical independence of woman and promoted women’s creativity, Hershman coalesces voyeuristic desires with the conception of “self” in a claustrophobic environment. 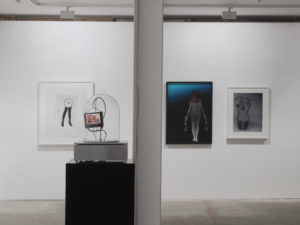 That this piece outwardly mimics the stylistic tendencies of minimalist sculpture is not to be neglected. Room of One’s Own stands as a slick and polished wood, metal and glass structure which only hints at an agitated interior. Its endowment with a periscope and the intermittent sounds of laughter lure an otherwise timid public. The periscope can be moved from side to side to survey the interior — a miniature bedroom permeated by technology. Its essential function, though, lies beyond being a simple peephole, for it has the ability to activate various objects within the virtual room. Within it are also various doll-sized objects like a brass bed, a director’s chair poised on a carpet, a pile of discarded clothes and a back wall that doubles as a video screen. All of these objects are linked to short narrative video sequences when pointed at with the periscope and can be seen on the back wall of the room. What is principally present however is a seductive-looking blond woman who acts out scenarios pertaining to the objects and enunciates, with a slight foreign accent, paroxysmal defensive statements.

For example, a try out in this interactive room might present the following diegesis: when the periscope is aimed at the pile of clothes, the woman is caught in the act of dressing herself and may say such things as: “Excuse me I have to get dressed. You want to see me naked? Forget it. Would you please turn around? I wonder if you would do this I were a man?” A look at the brass bed triggers a video of the woman seemingly in the process of sexual intercourse or perhaps something more violent. When the telephone is eyed, the woman talks on the telephone and alluringly pronounces futile rebuttals: “Stop looking at me. There’s nothing in here for you to see. You’re annoying me.” The loss of privacy in this mediated “private” sanctuary, as illustrated by the presence of technology, is reiterated by the viewer’s activation of these mise-en-scenes. This seeping in of the public into the private is emphasized by the realization that viewers can see their own eyes in the miniature video screen/television. And when the reflection of your eye is targeted, a gun aimed at your peripheral vision is triggered. It would seem that the contemplation of oneself as the agitator of these staged scenarios is not permitted. This is outlined by the fact that when the periscope is held in a fixed position for a certain amount of time a close-up of the woman’s face can be seen with the text: ARE OUR EYES TARGETS?

While the smooth technological capacities of Room of One’s Own are to be admired, the question remains how it may subvert sexist representations of women in the new technologies. Laura Mulvey in her essay “Visual Pleasure and Narrative Cinema” reminds us that:

Although the piece is indeed interactive, inasmuch as limited actions by the viewer can trigger responses from the woman on the screen, one must not mistake this for the actual reversal of the gaze. For if the beautiful woman in the miniaturized interior (in a box) does indeed respond to our advances, this is not to be confused with a real living confrontation that could pose a threat to our peering eyes. Instead she represents a new technologically-masqueraded version of the cinematographic to-be-looked-as-ness of women. Slightly more aggressive perhaps, in the style of Sharon Stone — but just as titillating — this woman has been placed there in order to be seen, and by the desiring male gaze. As no real positioning of the female gaze (other than a lesbian one adhering to heterosexual standards) is present, this negates “otherness” at almost all levels of subjectivity. The scopophilic enjoyment is not lost but indeed heightened by the woman’s captivity, agitation and anger, as well as by the violence connoted in the aiming of the periscope.

If the fragmentation of the self coincides with feminist determinism, it does so at a time when the impact of technology in the formation of subjectivity is pervasive. The sophisticated concatenations of determining this “self” in light of oppositional trends embarks us on an arduous journey to deconstruct normative agencies of signification (pro-feminism or status quo hegemony). Perhaps, because these almost schizophrenic projects are at play in such a piece, it remains difficult to determine if Room of One’s Own establishes the liminality of woman/sexuality or if it reinforces the suture of these separate significations in the worst cliche. Its seductiveness, somewhat unfortunately, relies on this very ambiguity. That a woman such as Hershman could be at the forefront of art and technology is laudable and inspiring. Yet by seducing her audience with what can be interpreted as the reinstatement of woman-as-object, this work demands a participation and a role-playing difficult to leave uncriticized.