Like visual art, contemporary dance is under reformulation in relation to new technologies, challenges to notions of audience and spectacle, and cultural hybridizations. With Karas’ Noiject and the Ballett Frankfurt’s Eidos:Telos, audiences at the Festival international de nouvelle danse this year witnessed large-scale productions which posited an experimental public or social space, circumventing the space of intimacy so often explored in dance. Choreographers Saburo Teshigawara of Karas Company and William Forsythe of the Ballett Frankfurt seek to demonstrate a multiplicity, and a social or philosophical plane where individual nodules of subjectivity collide. The only partially synchronized movements of the ensemble of dancers in these works evoked a profound sense of alienation. Forsythe and Teshigawara have sketched out a social space in which “communication” between individuals is not a primary objective.

In dialogue with each other, Noiject and Eidos:Telos indicate a stream of development for a new choreographic form. Each challenges the parameters and conventions of contemporary dance, and in Forsythe’s case, ballet traditions, with distinct results for the audience. Teshigawara, whose company is based in Tokyo, introduces hybridity through his own plural formation, as visual artist, mime, butoh dancer, and choreographer. The Frankfurt-based Forsythe, whose challenges to the form take its purity as a necessary starting point, hybridizes his choreographies through the injection of a philosophical and speculative approach into a kinetic and visual form.

Since the early years of this century performance artists, dancers and choreographers have strained at the conventions of the traditional stage and its static audience, in a effort to relieve them of their hypnotic power. Teshigawara and Forsythe each manipulate the space of the stage to expand it beyond its former parameters, doing so in a way which leaves the spectacle of the dance intact. In particular, sound and noise are used to push the stage and the audience phantasmatically into a virtual affective realm. Noiject synthesizes a claustrophobic, metallic post-apocalypse in which a grim militarism coexists with whimsical and isolated poetic gestures. Teshigawara’s spatial projections are futuristic, but have the aura of a fait accompli, due perhaps to the emotional desperation evoked by the dancers’ frenzy. Eidos:Telos feels like the site of a game. The cool, blasting soundscape unites the bodies of the audience in an identification with the choreographer’s intentions. The dancers’ bodies and mobility and the vacant luminous space are the occasion for an almost textual play of chance and intention, the conventions themselves becoming available materials within the game-site. 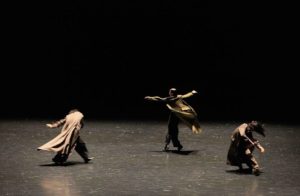 Karas’ Noiject consists of one long act. Teshigawara converts the stage into a giant metal “box,” the patina of which suggests the rusting iron of decaying industrial architecture. Beyond its visual impact, the set provides, literally, a sounding board for the dancers’ movements and an echo chamber for the huge and aggressive soundscape which gives Noiject its title. The iron casement quickly becomes an inescapable, resounding space of dilemma, which works to emphasize the fragility and frenetic motion of the dancer’s bodies. At times the dancers throw themselves to the metal-decked floor as if physical duress were unavoidable. The tension visible in the staccato gestures and stiff faces is evidently occasioned by the intensity of the noise which bombards and permeates their bodies. This noise-induced physical tension, in which the audience participates viscerally, resonates as a metaphor for contemporary urban existence.

In the opening sequence of Noiject, a large group of dancers stand in black gowns and masks, their gestures confined to their hands. These delicate, mime-like movements recur within a militaristic grid but also appear randomly and with chaotic effect. Teshigawara integrates moments of the butoh tradition into Noiject. A dancer’s body suddenly loses its vocabulary of rigidity and frenzy and moves with an inner illumination and intention. This hybrid of dance forms permits Teshigawara to develop a multivalent choreography not focused on physical virtuosity. Energy flows around the dancers’ bodies but rarely escapes. As in Forsythe’s choreography, communication among the dancers occurs through synchronization, not through the privileging of individuals and pairs of dancers.

In the tripartite Eidos:Telos, an operatic and apocalyptic central act is “framed” by two formally complex tableaux which integrate improvisational phrases and an interrogation of ballet forms. Certain props activate the otherwise sparsely decorated stage, emphasizing an impressive sense of space and vacancy. The dance which unfolds there is both nonchalant in its lack of recognizable structure and utterly rigorous in its precision. References to the space of the rehearsal studio are made subtly, through an illusion of the free play of the dancers, and their spontaneous and disaffected interaction with the props. Their rehearsal-like garb in the first and third acts, a heterogeneous array of leggings and tunics, is unified by a designer colour scheme.

The central act of Eidos:Telos is visually and emotionally distinct. The dramatic intensity of this portion stems directly from Dana Caspersen’s textual performance as Kore, a feminine bureaucrat of the underworld, which Forsythe integrates into the greater whole of Eidos: Telos by formal means. Like the directed improvisations of his dancers, Caspersen’s performance becomes material with which the choreographer works.

Time is implicit in the structure of dance, but Forsythe brings its role explicitly to our attention through his deft use of random and synchronized motion. In a vacuum of narrative, the movement sequences do not accumulate meaning as they progress. Further troubling the “flow” of time in Eidos:Telos are a digital and several mechanical clocks on the stage. The digital clock’s register counts rapidly forward, stalls, counts backwards and resumes. Events on-stage unfold as if according to some logic, but arrive nowhere, their outcomes as indecipherable as the impulses which motivate them. Human patterns of interaction are presented as events, governed by the physics of time and mathematical probability rather than by any internal psychological force. Mediation is at the base of the methodology and structure of Eidos: Telos. The dance as a whole feels played, in the sense that we play back a digital recording, with random disruptions of signal introduced by the system itself. The sound, performed live by a violinist and three horns, is, appropriately, electronically rendered, an effect which further tampers with the audience’s intuitive sense of time and duration.

As a visual artist, this reviewer was particularly sensitive to the tendency in Eidos: Telos and Noiject to construct and dissolve tableaux. Both choreographers work with non-sequiturs, nonsensical and repeating phrases which gain an emotional resonance through their lack of sense and disjuncture with other gestures. Chaos 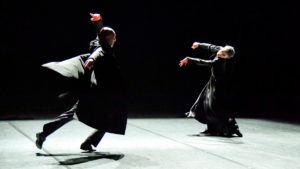 develops on-stage, and then, imperceptibly, the lack of form is allowed to accumulate into an image. The dancers, as the Kore character comments of the throngs of the dead in her underworld domain, “were like particles of a cloud.”