A university gallery seemed an unlikely venue for Doug Buis’ show, “Home and Oasis,” which sought to undermine common Western notions of the earth’s existence. However, such a conservative academic milieu served to accent the work’s ironic content. Buis has been addressing ecological issues since the mid-1980s and his most recent work offers fictional accounts of contemporary urban society’s relationship with nature, which acknowledges how capitalist interests, guided by science, are adversely effecting the planet.

Home (1992) features a miniature living/dining room with a glass front wall, situated atop a pedestal. Viewers activate the sculpture by pushing a red button, causing water to pour through the mail slot and two windows. The tiny furnishings include a one-hundred-and-thirty millimeter long sofa, a five millimeter high plastic telephone, and a functioning television with a forty-square millimeter screen, remain stationary as the space fills to capacity. During the seven-minute flooding and draining cycle, images of sub-Arctic forests and lakes are projected onto a flat surface behind the small domicile. These alternating scenes depict Cree territory in northern Quebec known as Whapmagoostui, or “Great Whale,” where Hydro-Quebec’s colossal installations over the past decade have resulted in the submergence of massive areas of land underwater. This incredible manipulation of nature has eliminated many of the aboriginal population’s ancestral hunting and fishing grounds, while providing the Quebec government with huge financial gains. Buis’ sculpture personifies the conflict between divergent cultural perceptions of the home, which from a First Nations’ view refers to an entire ecosystem as opposed to the Euro-Canadian definition of an architectural unit. However, the artist’s sympathies in this debate are clear for he mimics the dominant urban society’s destructive technology to subvert a fundamental model of its being.

Buis’ playful context and size inversions serve to unite the fictional objects of this exhibition, as evident in his utilization of houseplants to create a series of works called Portable Gardens (1994). These sculptures feature cacti, moss, violets, and rubber plants placed in both real and constructed computers. The monitor shell of a late-1980s desktop unit has been renovated to accommodate a grow-light and an assortment of domestic flora, while its keyboard functions as a rock garden planter. Similar configurations are used to transform the operational areas of two wooden notebook-like computers into green spaces, complemented by wheat, grass, and dirt wedged between two glass plates that substitute for liquid crystal screens. That the artist portrays nature superceding the most pervasive technology of this era, suggests a realignment of values in favour of those organic entities which are critical to human survival. Such a concept is furthered by Buis in a collection of fictitious magazines accompanying these computers, with titles like Portable Garden Illustrated and Portable Garden Magazine. Each glossy cover features photographs of lush plants sprouting from computers, with advertising slogans such as “Most Powerful!,” and “New for `94.” The marketing push of these imaginary machines pokes fun at capitalist strategies, and more specifically the superficiality of many ecologically friendly products, but the faint cut-and-paste lines visible on the surface of the colour photocopied magazines confirm that they are imperfect replicas.

At times, the atmosphere of “Home and Oasis” seemed closer to that of a high school science fair rather than an art gallery, complete with students observing and operating Buis’ numerous models, not all discussed here. The most elaborate work, Oasis (1994), combines written and visual information to present a radically new world view. A text on the wall with excerpts from the September 1994 issue of Science America documents an ongoing discussion among various members of the Western scientific community regarding the earth’s construction. The fictional article focuses on the recent discoveries of Dr. Jane Knott-Guya, who detected a heartbeat off the coast of California, and her subsequent findings of musculo-stratic tissue, parts of mechano-organic hydraulic entities, and a silicon-based nervous system within the planet’s core. Accordingly, Buis was then hired by the doctor to create geo-models which illustrate her theories of the earth’s organically-based life-systems.

The first of these “commissions” is a cross-section landscape painting revealing the various muscles, veins and arteries found below the planet’s surface. The image’s flawed perspective and awkward rendering confer a naive sensibility. Situated at the confluence of two rivers is a cityscape marked by an actual push-pin and attached to a string line, which leads to a three-dimensional table-top model. Casually painted capacitors, resistors, and diodes, affixed to circuit boards placed side by side, represent business, industrial and residential structures in this imaginary urban centre. Thus, the model draws a parallel between how motherboards command computer activity and the manner in which contemporary cities direct local ecosystems. Both the painting and sculpture echo a passage from the text panel, referring to the possible roles of human settlements on an anthropomorphic planet:

The more popular of the two theories is that of cities being part of the earth’s nervous system. The other popular theory (more interesting although less popular perhaps because of the nature of the theory and a natural bias against it) is that of the city as a form of skin irritation or dermal condition.

The culmination of the piece is found in Oasis’ largest component, a six-foot diameter globe that celebrates the earth’s fertility. This intricate model is hand-crafted from wood, papier-mache, electric motors, incandescent lights, plaster, latex, acrylic paint and varnish. Held aloft by a metal pole, the huge sphere has a longitudinal section cut away. The interior perspective, constituting segments of North America, South America, Europe and Africa, reveals a complex system of muscles, ducts, pumps and reservoirs that direct the earth’s bodily functions. Viewers can operate and observe these various human-like parts by pushing any of the thirty-four buttons located on a control panel. For example, the button marked “Earthquake Muscle” causes an area inside the lower part of South America to vibrate, and “Central Pumping Unit” initiates the flow of liquid through a heart-like organ in the model’s core. The “Magma Reservoir” and “Crystallite Spinal Cord” buttons respectively activate tiny red lights beside an oblong orange shape below the surface of Africa and a twisting silver line within Europe. Assigning to the earth sentient traits emphasizes the long-term dilemmas connected with the perpetual extraction of its’ natural resources, as ever improving technology enables Western society to access and process greater amounts of substances such as oil and nickel. How long will the planet be able to survive once its “Petrolia Sacs” and “Neuro Furnaceoid Nerves” have been depleted? However, the environment is not rendered completely defenseless, as volcanic eruptions and earthquakes, according to the text panel, are nature’s way of curtailing as well as punishing offensive human activities. 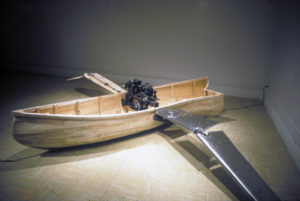 “Home and Oasis” effectively blurs the lines between fact and fiction, providing viewers with a comfortable space to consider how the earth continues to be devastated by the union of science and capitalism. Fortunately, because of the comedic scale manipulations, eccentric gadgetry and homespun techniques, Buis never becomes self-righteous. Perhaps this unassuming approach is an ideal way to convince future political, business and scientific leaders, such as the students at this university, of the desperate need for a more amicable relationship between humanity and the earth.