Deleuze’s terminology graphically evokes the way in which elements from the past may disrupt the present signified in an image. A recollection image is an image that exists on the plane of the present but has the power to evoke a plane of the past. If an event is represented as a smooth, consistent plane of meaning, a recollection image is a sharp point that punctures it with a chronological or discursive presence at odds with the present. In the cases below, the disjunction is not necessarily temporal as much as spatial. The movement among cultures creates the same sort of discursive disjunctions that the passage of time within a culture does. So when an image surfaces from another place, another culture, it disrupts the coherence of the plane of the present culture.

It is useful to bring anthropological approaches into the discussion of fetishism and representation that Marxist cultural critics have fostered. The generations following Marcel Mauss’ germinal study of gift economies have tended to focus on the process of exchange itself. Lately, however, anthropologists have also been returning to the question of particular objects of exchange and describing how they move within and between cultures as not only a market exchange but also a cultural one. Their approach permits a certain obduracy of the object to remain, so that we can pay attention to its fetishistic quality, in contrast to other efforts to reduce transnational flows to simply the flows of capital or of signs.

There is no doubt that our world system is interconnected by the flows of capital and power. Similarly, there is no doubt that the postcolonial condition describes not only “third world” situations but a space we all inhabit, interconnected as we are by global flows. Nevertheless, this process of worldwide interconnection is more complex than an inevitable process of capitalist reification; it is incorrect, as well as Orientalist, to understand only “third-world” cultures to operate on gift-type economies while “first-world” economies are commodity-based through and through. Even objects that move in the apparently sanitized flows of transnational capital encode movements of cultural translation and mistranslation. Arjun Appadurai looks at these translation processes in the social life of an object in terms of knowledge: the continuities and discontinuities in knowledge between the producer and the consumer.  There may be no knowledge gap in the local movement of a quart of peaches or the transnational movement of a car, both cases in which the producer and consumer share knowledge about a commodity thanks to proximity or standardization. And large knowledge gaps mark the movement among cultures of objects that encode personal or ritual meaning. Film can follow an object as it embodies and communicates, or refuses to communicate, knowledge.

Appadurai complicates the Marxist notion of the commodity by understanding objects to move in and out of commodity status in the course of their lifetimes. In cross-cultural movement, an object’s “commodity status” is highly mobile; for example, a thing that is sacred in one society may be a commodity in another, and intercultural relations heighten the likelihood that an object may enter the commodity context of another society.  Objects may pass in and out of identities as commodity, gift, ritual object, or trash.

The films I will discuss begin with the relatively simple transnational conversions of labor to capital, and move more idiosyncratic and intimate travels of transnational objects. First are those films that trace the movement of an object as it shakes the traces of local cultures to become a deracinated, transnational commodity. The transnational object in Amos Gitai’s Ananas (1983) is a can of pineapple. Its contents are produced in Hawai’i, label printed in China, can assembled in the U.S., and so on. The traces of humans who smelted the steel, cut down the fruit, and ran the printing press would be utterly lost, as in most commodities, were it not for Gitai’s excavation, which de-alienates their labor. 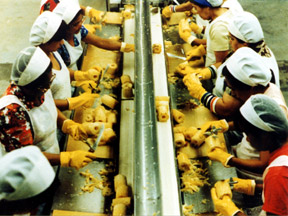